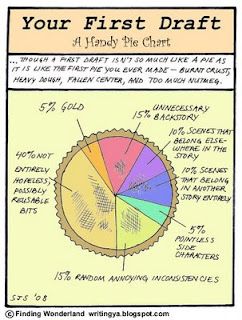 Lately I've been reading a lot of tweets and blog posts by budding writer and undoubtedly an Author-to-Be Ksenia Anske. One of the things she keeps reiterating is: First Drafts Suck.

Last November, I took part in the NaNoWriMo challenge. I decided to adhere to the advice not to look back, not to edit-on-the-go, not to stop writing and typing and creating until the words "the end" tacked themselves onto my manuscript as if by magic. For me, this method worked. You have a small idea that grows into a plan that can be poured into chunks that you call a chapter division and then... you write, write, write like mad.

I had to turn off the editor switch in my brain in order to pull this off, but it worked. I forced myself not to focus on whether my main character's eye colour was consistent throughout the manuscript or if it was even mentioned at all, not to worry about her hair being in a ponytail one moment and falling over her shoulders in long, loose waves the next. Those were just minor details, and I had to get the story down first.

I've gone back to edit that text once so far, three months later. I've edited it, by which I mean I've added approximately 8000 words, and still I'm not satisfied that this particular plot is good enough for a second pair of eyes (not even my mother's). It's a permanent work in progress. I doubt I'll ever send it anywhere. But I have no intention of just leaving it be either. I've already learnt so much from doing it. And even if I don't look at it for another three months, ideas keep bubbling to the surface on how to make it better still.

That NaNo exercise caused a dam to break - suddenly my head is overflowing with words, sentences, ideas, sparks and even pieces of dialogue. I've learnt to think differently about the entire project of writing a book. You don't just sit down and start with the opening line, write something brilliant and perfect and as soon as you've reached The End you send it to a publisher (who screams in elation and sends you a lifetime contract immediately). It doesn't work that way. For anyone. And the sooner you realise that, the sooner you can stop beating yourself up over tiny inconsistencies, gaps in the story or a first draft that isn't pristine. Because first drafts just aren't pristine. They suck. There you have it.
Posted by Sandra at 21:43

Email ThisBlogThis!Share to TwitterShare to FacebookShare to Pinterest
Labels: Figments of a Non-Fictional Nature, NaNoWriMo 2012, On Writing