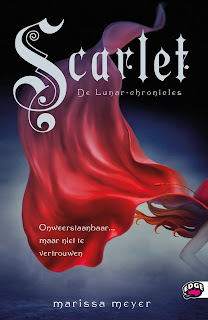 Hello Marissa, thank you so much for doing this Q&A! What a great way to celebrate the release of Scarlet, in Dutch translation!

Where did you come up with this futuristic twist on a fairy-tale idea for this series?
I entered a writing contest a few years ago in which the host had listed about ten random prompts and writers had to choose two of them to include in their stories.

My two prompts: set it in the future and include a fairy-tale character. My contest entry was a sci-fi version of Puss in Boots and I had so much fun writing it that I thought I would try to do an entire series of sci-fi fairy tales! (The ironic part of that story is that only two stories were submitted for the contest—and mine didn’t win!)

Do you have a thing for fairy tales, and which is your favourite?
Oh yes, I’ve loved fairy tales since I went to see Disney’s “The Little Mermaid” in movie theatres when I was five years old. Not long after that, I was given a book with “The Little Mermaid” fairy tale by Hans Christian Andersen in it and was of course devastated that it was nothing at all like the movie! So that kicked off a very early fascination with all things fairy tales, particularly the dark, eerie versions of the stories that are slowly getting lost in today's society.

Though I don't have a true favourite, I love the tales that people think they know, but they may not have heard the darker versions. Such as how Cinderella's stepsisters cut off their toes and heel to fit the slipper, or how Rapunzel's prince is blinded by bramble bushes...

To read the entire interview as well as Part Two on writing, please follow this LINK to Creative Difference.
Posted by Sandra at 14:08

Email ThisBlogThis!Share to TwitterShare to FacebookShare to Pinterest
Labels: Author Interview, On Books, On Writing