Author Diantha Jones on The Oracle of Delphi series 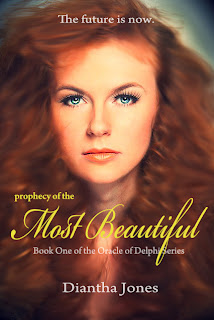 Hello Diantha, thanks for agreeing to not one, but two Q&A’s!

Can you tell us a little bit about the basic plot of your Oracle of Delphi series?This series is based around Greek mythology and centers around the Oracle of Delphi, the prophesier of the future, who just happens to be an 18-year-old red head from Adel, Georgia named Chloe Clever. After years spent plagued with hallucinations and tormented dreams, she eventually learns that it has all been for a reason. She has a great destiny to fulfill as the first Oracle in four decades...and the only one who can save Myth from a prophecy that could bring the entire kingdom crumbling down. Literally.

How did the idea for this series come about?A hardcore love for Greek myth spawned the whole thing. I adore it. It was more about finding a focus amidst all of the myths and legends. I spent months with my head buried in books before I decided to give the OOD a try. Man, I'm so glad I did.

To read the entire interview and part two "Get to Know the Author", please follow this link to Creative Difference.
Posted by Sandra at 14:04

Email ThisBlogThis!Share to TwitterShare to FacebookShare to Pinterest
Labels: Author Interview, On Books