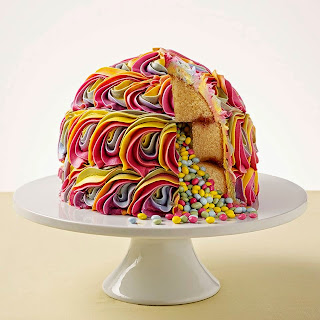 Not too long ago I decided to give writing - or submitting, to be more precise - another shot. I had a few snippets and fragments to revisit, a short story that could do with another edit and I saw this picture of an Asda cake that nearly hurt my teeth just looking at it, and I decided to write a short story to accompany it, all for a contest.

That contest is still open (you can still vote for both, but since they're Dutch I'm not sure if you can read either of them very well), and I did get one other story of mine published in an online literary magazine, so all in all it was already worth it.

But wouldn't you know, the one story out of all of these that I really had high hopes for is the one that came back from a publisher with some lovely feedback... but still a 'no'. I should show more and tell less. Ah, Nemesis, thou art back. I've put so much feeling into the story, made it work in a good progression from beginning to end, with a dash of pathos and a helping of humour, but it's too telly, and not showy enough. Well, I'll just have to get back to that whenever I can find some time.

Thing is, I really do appreciate the feedback. I can work with that. The rest of the e-mail was pretty positive, too. Just that the publisher wasn't really looking for chicklit (which that story happened to be), that sales figures were dropping in that genre and that they planned on publishing even fewer titles next year. Meaning, they can be even more selective about the few that make the cut.

But unlike So Many Other Writers I can't just erase my planning and dedicate what little free time I have to writing. Even when I do sit down and type for a bit, I never know when I'll be able to get back to that story. There's the kiddies, but mainly the deadlines for the translations I'm working on. That I love working on. They come first, however much I love to write and however much I'd love to write. There just isn't enough time in the day, week or even month to do *everything*.

Which simply means that I'm a mommy first and a translator second. That's what I do and what I love doing. It's my job, and I'm pretty good at it, too. Writing is a dream, an ambition, an aspiration. But it'll have to wait. And that's not a pathetic excuse to procrastinate, but a decision that you sometimes have to make.

Email ThisBlogThis!Share to TwitterShare to FacebookShare to Pinterest
Labels: column, On Feedback, On Writing